As unassuming as he seems, Jaka Dijak has a unique creation in his hands. Honey, produced from a 200 year old tradition of beekeeping, has been mixed with gold (yes, real gold), to create what he has named ‘Golden Honey’.

The Golden Honey floats in an even exceptional crystal vessel, called ‘Honeydrop’, which has been adorned with gold ornaments, precious and semi-precious stones. Traditional Slovenian and European methods, and new technologies and procedures, have been used to create this objet d’art.

Collected by the endemic, hardworking Slovenian Carniola bees, the natural honey used has been produced in the clean alpine environment surrounding Bled, Slovenia (European Union). The final alchemised honey has more health benefits as compared to normal honey. Dijak, who is the project manager for this product, says, “Gold, consumed in metal form, is non-toxic and non-irritating. It can potentially improve the immune system and cognitive functions. Golden Honey, however, is not meant for daily consumption. It is best used as a food additive or for garnishing on special occasions. The numerous minerals, acids, plant extracts, antibacterial substances and vitamins in this honey have a positive effect on the body.”

The crystal glass used has fine clarity, high and clean sound, excellent light permeability, rainbow light refraction, and is light weight. The handcrafted wooden case, made from light yellow spruce wood, includes a variety of tools to take care of your little treasure. Besides Honeydrop, the gift set is composed of a scalpel for opening the Honeydrop; a spoon, with its saucer, for ladling honey out of the vessel; Idrija lace to put Honeydrop on; a deer skin cloth for polishing the glass; and white cotton gloves for handling the glass.

The time required to produce and deliver the product varies with each set, average being one to three months. This is due to the exacting methods required to produce Golden Honey and the possibility of custom-designing a gift set according to the buyer’s wishes. Only 120 unique sets are produced each year since it takes an astonishing 60 people – designers, craftsmen and engineers – to create each piece.

Uniqueness Redefined
Every set has a serial number, name and certificate. A step ahead, the buyer can incorporate his company logo, initials or date in the vessel. The buyer can also choose a theme which will be represented through the ornamentation. If you are gifting Golden Honey to someone, your gift will be sent with a customised letter with your choice of text and logo printed on a paper containing gold leaf.

Dijak unites all customers of Golden Honey under the Golden Honey Club. Apart from other exclusive privileges, the club members can also get their jugs refilled once the honey finishes.

The company, ADDA Ltd, is set to enter the Indian market and is looking for business partners and distributors in India.

Golden Honey is a harmony of nature, art and prestigious materials. It is a priceless gift for others or even yourself, and an intelligent long-term investment option. 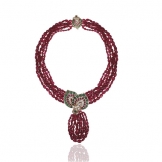 Glutaweis – Swiss Skincare at its Finest