December 21, 2018: The recently held British Polo Day turned out to be a popular affair as key figures in government, the aristocracy, diplomats, military, art and popular culture and fashion attended the sports event. 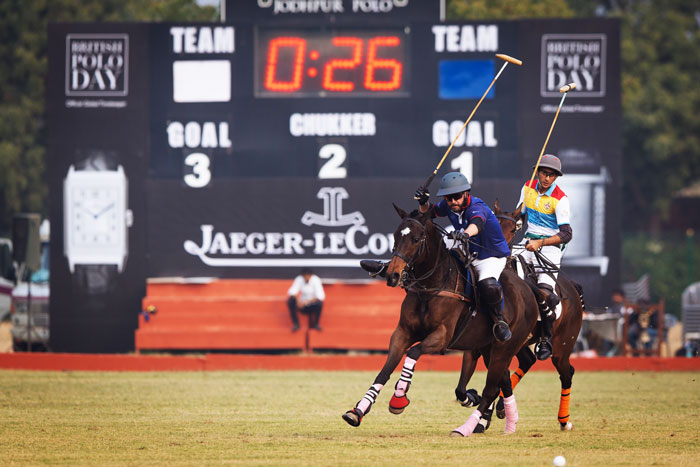 With Swiss watchmaker Jaeger-LeCoultre as the official timekeeper of the sports event, which was held in Jodhpur, India, it creates opportunities for business in emerging and growth markets, giving its partners access to international connections. British Polo Day is an ambitious and fast-growing company which partners with some of the world’s best brands such as Chelsea Barracks, VistaJet and hosted by His Highness The Maharaja Gaj Singh II of Marwar-Jodhpur.

In this year’s edition, guests were treated to the colours and vibrancy of Rajasthan, staying at the Umaid Bhawan Palace. Former England Captain and Royal Salute World Polo Ambassador Malcolm Borwick and His Highness Maharaja Sawai Padmanabh Singh of Jaipur, known to his friends as ‘Pacho’, graced the field. The first day on the field saw the Royal Salute team against Mayo College, helmed by Pacho Jaipur. But it was Pacho and his team that eventually lifted the Marwar Tropy.

On the evening of the second day, guests followed a procession of fire breathers, Rajasthani trumpeters and traditional Marwari horses to the battlements of one of India’s largest forts, the majestic Mehrangahr Fort. Peter Prentice, Royal Salute Global VIP Relationships Director & Chairman Keepers of The Quaich Society, led a traditional Royal Salute Quaich Experience to toast to His Highness and the Game of Kings.

The following day saw the British Army VistaJet team square off against Jodhpur II for the Umaid Bhawan Palace Cup. After a slow start, the action came in the fourth chukka, and with a minute to go the British Army took the lead by half a goal. With eleven seconds on the clock a sixty-yard penalty was awarded to Jodhpur, which they scored to settle the game by a half goal victory. Jodhpur I took on Mundota for the Yuvraj Shivraj Singh of Jodhpur plate, and strong play by Jodhpur saw them 5-2 up at the half. Jaipur came in strong in the second half and the game ended in an honourable draw. The agile ‘Sahara”, ridden by His Highness Maharaja Sawai Padmanabh Singh of Jaipur, was named Jaeger-LeCoultre’s ‘Best Playing Pony’. Following the prize-giving ceremony, guests sat down for a gala dinner on the lawns of the Umaid Bawan Palace hosted by His Highness Gaj Singh II Maharajah of Marwar-Jodhpur.

A total of £38,000 was raised for Head Injuries Through Sport, a charity close to the heart of British Polo Day. Nader Iskander Jaeger-LeCoultre Brand Director, said, “We are pleased with our association with the British Polo Day, since we have a historical connection with the sport of Polo which was the inspiration of creating our Reverso collection. Since the beginning of the 1930s, the watch was born of a challenge, that of designing a model that could withstand the polo matches of the British Army officers in India, its dial smoothly concealed by reversing the case, to reveal a back that fully protects the face from possible mallet strokes. Jaeger-Le-Coultre has always been about finding a symbiosis between form and function and the Reverso embodies that and has been enchanting both men and women with an eye for beauty since its creation and today continues to offer the world a timeless aesthetic."

SIHH and Baselworld to coordinate their dates from 2020